For the first time in quite a while, the clearance rate dropped to the lower 70% range, with the REIV reporting a clearance of 74%, at 6pm Saturday.

Do we think that means the market is turning? We don’t think so, but we do think that some buyers are confused by the mixed methods of quoting (some are still being quoted using the old system, while those listed post-1 May use the new ‘more accurate’ system).  We also saw some good properties pass in (eg 29 Bridge Street Hampton – see auction spotlight below) at what we believed were strong levels and some sold for even more afterwards.

Next weekend is now the last ‘big’ weekend before the market goes into hibernation before resuming with some numbers again in August.  This may result in some increased sales of homes sold privately, or, as many like to now call it, ‘off market’, particularly for vendors who have recently bought and want to minimise their exposure to any potential changes in the market place.

With reports this morning that the Melbourne population, currently sitting a little over 4.5 million, is likely to grow to nearly 8 million in the next 30 years, it is hard to imagine demand changing for the well-located, good-quality family and downsizer homes.

29 Bridge Street Hampton (Stephen Wigley/Paul Bond, Hodges) – approx. 716sqm, north-facing rear with permits (front and back) for two townhouses – 4 bidders and passed in for $2.25m, selling afterward for an undisclosed amount – around $3,300sqm

8 Chesterfield Avenue Malvern (Warwick Anderson/Oliver Booth, RT Edgar) – almost 1,400sqm, and another more square-shaped block with south-facing rear (although much bigger) – sold before auction for an undisclosed amount over $7m Stephen Wigley from Hodges Sandringham faced a large crowd with four bidders at the auction of 29 Bridge St Hampton.

This auction provided prospective buyers with another opportunity to purchase a well-positioned, north rear development, similar to recent good sales in Willis and Littlewood Streets in Hampton. With approximately 716sqm of land in close proximity to the beach, shops and train stations, the property included approved plans for a dual occupancy development, if potential buyers didn’t want to retain the site for a single home.  A good crowd of more than 70 people sought out the winter sunshine to watch Stephen Wigley and Paul Bond from Hodges run proceedings. Opening with a vendor bid of $2.0m the auction began slowly before picking up pace after a quick break. Four bidders brought the price up to $2.25m, where Stephen again conferred with the vendors. No further bids could be drawn from the crowd and the property was passed in at this level. The property sold afterwards for an undisclosed amount around $100,000 more.

Going to an auction as a buyer, it is important to be prepared for multiple strategies, including post-auction negotiations, as vendor expectations may be above market levels. A chilly, still winter Melbourne morning, but the bidding was hot at this auction – four bidders.

Premium north-facing land only a stone’s throw away from Glenferrie Road, this single-fronted Victorian, which clearly had seen better times, was up for auction less than two years after it last sold for around the $1.35m mark. Auctioneer Tim Derham looked for an opening bid and had to wait a while, so a vendor bid was placed at $1.8m. This started the auction and measured bidding between four bidders saw this property announced on the market at $1.975m and eventually sell under the hammer for $2.053m. What does this tell us? Good land (with above average width for the area) is still in good demand and the auction system is alive and well, as apparently this buyer (a younger Chinese couple) had only seen the property a few days ago.

Agent Opinion: How do you see the market heading into the winter hibernation period? 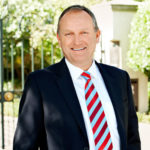 Anthony Grimwade, Director, RT Edgar: As winter begins to set in and with the June / July school holidays looming, housing stock is starting to tighten. Competition for well located period and contemporary homes continues unabated and this was witnessed with last week’s RT Edgar sale of 49 Murray Street, Prahran. An original two-bedroom double-fronted brick Victorian directly opposite Victoria Gardens and in the Hawksburn Village precinct, it was hotly contested between two buyers and sold for $3,110,000, $210,000 above the reserve.

Another key RT Edgar sale at the other end of the spectrum was 8 Chesterfield Avenue, Malvern, an unrenovated 1930s two-storey home on about 1,400m² of land that sold one week into the marketing campaign (price undisclosed) but believed to be in the vicinity of $7 million.