Tim Derham led the Abercromby’s team for the successful auction of 16 William St South Yarra: the north side of a stately Victorian in a central location, which sold for $7.01m.

We thought this week was a little hit and miss when it came to results. Some suburbs, such as Kew and Hampton, saw strong results and high clearances (Kew 100% and Hampton 87%), while others struggled to reach the 50% mark (Beaumaris 50%, Hawthorn 50% and Brighton 57%).

We think it’s safe to say that, for many of these pass-ins, price was a contributing factor.   Some vendors are factoring in the price ‘they want/need’ rather than considering the price the ‘market is willing to pay’.  However, it could spark a trend toward a steadier, or more cautious, market.

The new quoting laws are providing continued confusion for some buyers.  One auction on the weekend was originally quoted $1-1.1m on the Statement of Information (increasing to $1.05-1.15m during the campaign). At the auction, bidders were asking if the property was on the market yet.  The auctioneer took the opportunity to remind buyers that there had been other properties in the suburb selling at much higher prices. The property was finally announced ‘on the market’ at $1.285m, well above the original Statement of Information.

In general, however, we have seen a trend toward agents making a solid effort to provide more accurate quotes for properties. However, it can still be confusing for buyers who do not understand that vendors are not required to have their reserves within this range.

Some additional information buyers may wish to consider when it comes to price could include: Adam assessing the home and in discussion with listing agent Rae Tomlinson from Marshall White at the open for 24 Manning Road Malvern East.

The AFL preliminary final is on 23 September, which also lines up with the end of the school term, and that weekend is shaping up to be a higher volume auction weekend.

We have noticed an increased number of evening/twilight auctions in the lead-up to this date and there may also be increased opportunities to buy beforehand, potentially freeing the day up to attend football functions and/or leave for holidays.

As a buyer, you may wish to consider a strategy for this: Five bidders saw the positives in this property, which sold for a healthy $2.325 million.

This property had a lot going for it: convenient location, generous width (compared to depth) and a house (or any future house) that sits nicely up from the street. Auctioneer Walter Dodich gave his usual, no-nonsense preamble (how refreshing) and kicked the auction off with a vendor bid of $1.7m. It didn’t take too long before bidders one and then two came into play. At $2.15m, Walter paused the auction to seek (or maybe clarify) instructions from the vendor and, upon arrival, declared the property on the market. This only further enhanced interest from bidders, with another three coming in to play. With ‘mind calculations’ going into overdrive the property eventually sold to the opening bidder (who clearly wasn’t going to let this property pass him by) for a very healthy $2,325,000. 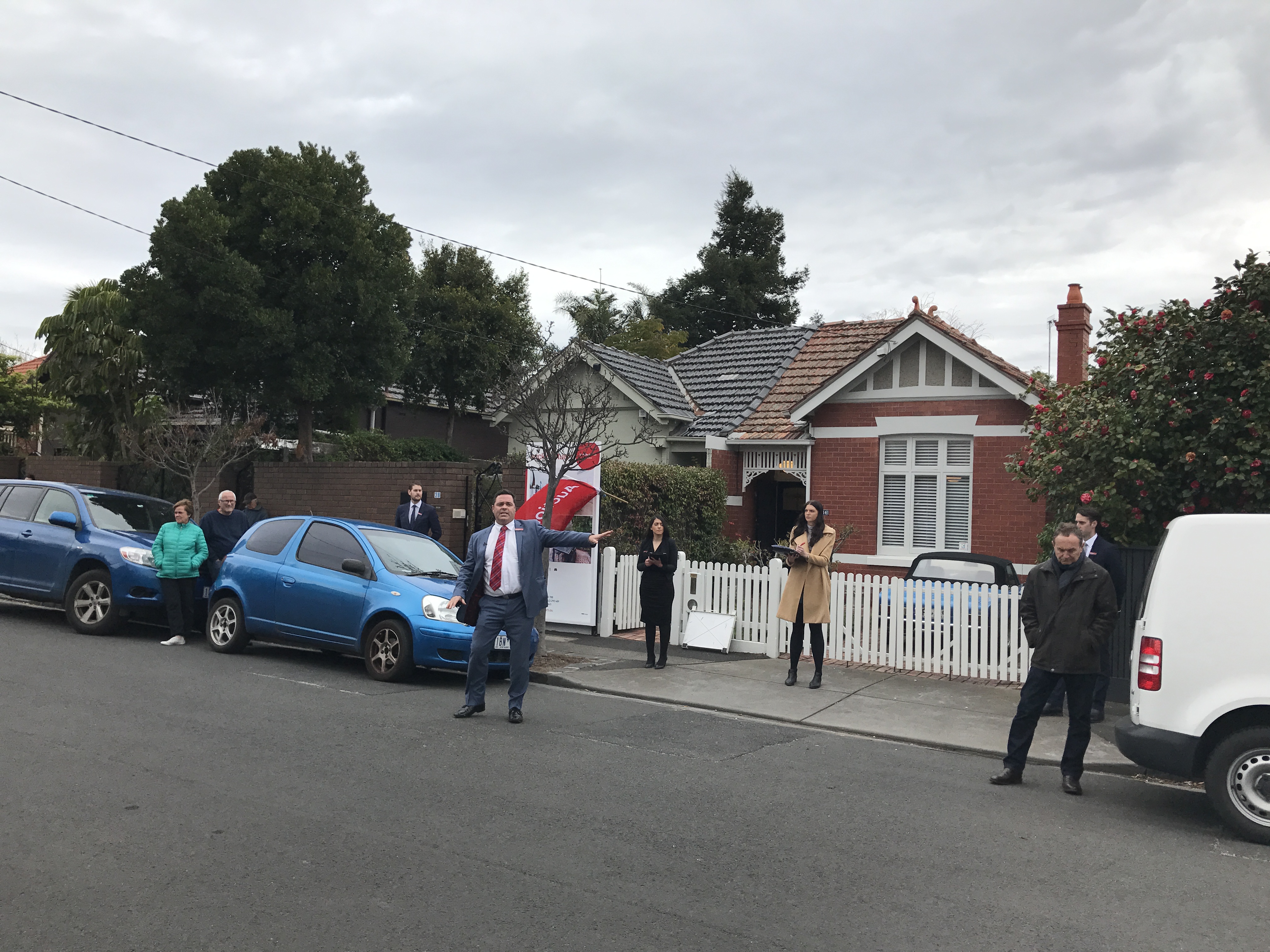 Andrew James and the Hocking Stuart team performed well at 36 Airlie Ave Prahran, which sold solidly above reserve for $2.325m.

This well-presented period home in a prime location was always going to bring out keen buyers. Being the north one of the pair, with OSP and good width to the block, only added to its appeal.  Once the auction was started by Andrew James from Hocking Stuart, an opening offer of $1.9m was followed by swift bidding before stalling slightly at $2.07m. A chat with the vendors did not yet bring the property onto the market, but a third bidder joined in anyway. His regular requests on whether it was on market were finally rewarded at $2.17m, which brought on a surge of bidding between bidders two and three. The rest of the auction was an entertaining battle of the two bidders going up in alternating $1000 and $5000 increments.  The wife of bidder three let out an enthusiastic whoop when he was eventually able to secure the property for $2.325m.