Having an architect on your team can provide you with insights into the design of the home and any impact this may have on the property’s future potential. You will also receive advice and concepts detailing how a house may be renovated or extended.

Timely advice can be extremely advantageous for you and it is all included as part of our service to help you make the best decision.

Ceiling heights are very important, and an element that can make-or-break the design and feel of a house.

For a modern new home, 9 feet/2.7 metres is about as low as you would go. Commonly 10 feet/3 metres (on ground floor) then 9 feet/2.7 metres (for a first floor) is about right. For basements, it is all about the clearance for the car, and 8 feet/2.4 metres is a minimum. Often newer homes these days will have lower ceilings for one reason: the house is cheaper to build.

Low ceilings can make a home feel poky and cramped. Higher ceilings give a spacious feel and provide better opportunities for taller windows, elegant pendant light fittings and ceiling fans. A clever house design will play around with differing ceiling heights, and this can have a great effect. For example, in hallways the ceiling height might be lower, then as you walk into a larger open-plan living area the ceiling heights are taller, which accentuates the feeling of space. Often in kitchen spaces you can get away with a lower ceiling height, and that will work more functionally with cupboard space (ie high cupboards are not that accessible and difficult to reach) and ceiling lighting is closer to bench working spaces, minimising shadows.

A problem with houses with lower ceilings is that you really can’t change them, and that should be an important consideration when looking to buy a home. 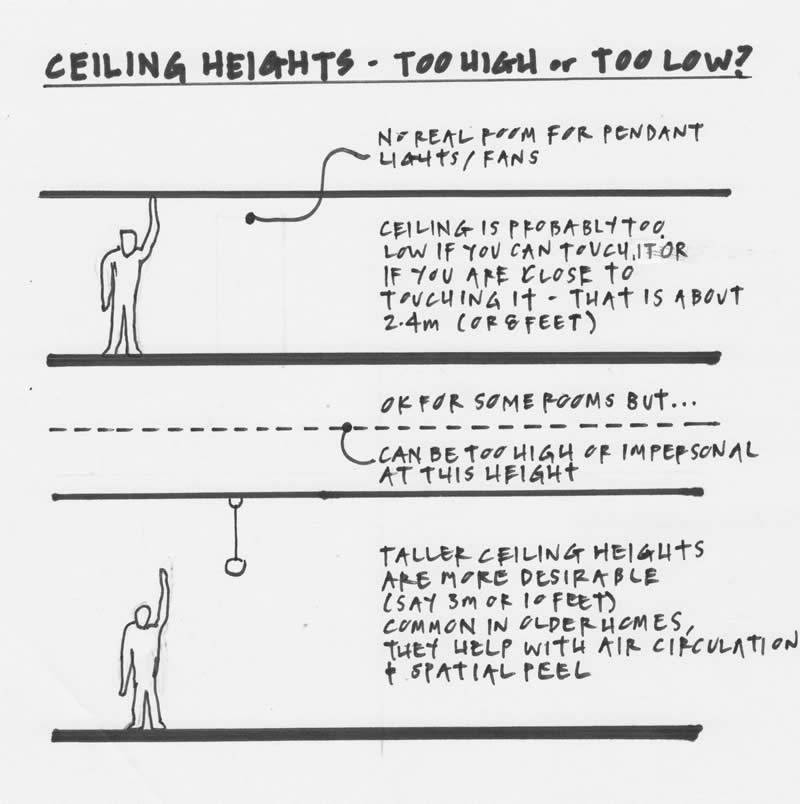 From ancient times, building on a prominent part of the land was of primary importance. Think the seven hills in Rome, the site of the Parthenon or, on a local level, Parliament House in Canberra or Government House in Melbourne.

In simple terms, building on the top of a hill makes perfect sense in terms of prospect for view, great drainage, prominence, security and opportunity for light. Of course, that is not often possible when looking for a home today in an established area, but there are certainly some things to look out for.

Aside from a perfectly flat block (ideal for development potential, access, drainage, easy internal/external connection), a good block is one that will gently rise up from the street to the facade (hence improving the appearance of the house from the street), then flatten off to the backyard fence.

Houses that sit down from the street are traditionally not well received by buyers, as they look inferior and are not well regarded in terms of Feng Shui principles. They can also be affected by drainage as, in extreme conditions, water can run off the street and collect at the front of the home, which makes driving in and out along a sloping driveway problematic and hazardous. These blocks, however, can have a nice sense of privacy and sanctuary.

Blocks that slope from one side to another can also be problematic, unless of course the block slopes gently (say 1-2 metres) down to the north, as this improves opportunity for light and lessens overshadowing from the immediate neighbour to the northern side (and minimises any potential shadows you may have from your neighbour to the south). Size, light and positioning is what we are looking for with bedrooms. Too often in large family homes the secondary bedrooms (i.e. those for the children) are small, dark or lack storage.

Try and look for the following: Buyers looking at houses located on corner blocks in inner-city areas have many things to consider. More often than not, we find these properties problematic as a family home option, and you need to be wary of the possible pitfalls.

Corner blocks can, however, perform very well in terms of capital growth, as if the land is big enough it lends itself to better development options as it has multiple access points for cars, and house entrances. A topic that comes up often in conversation for buyers is the rear orientation of the block. Why is it so important?

Generally speaking, properties on the southern side of a street will turn over (or sell) more frequently, and I think a lot of this is due to the lack of light into backyards and, simply speaking, they are not as pleasant to live in. 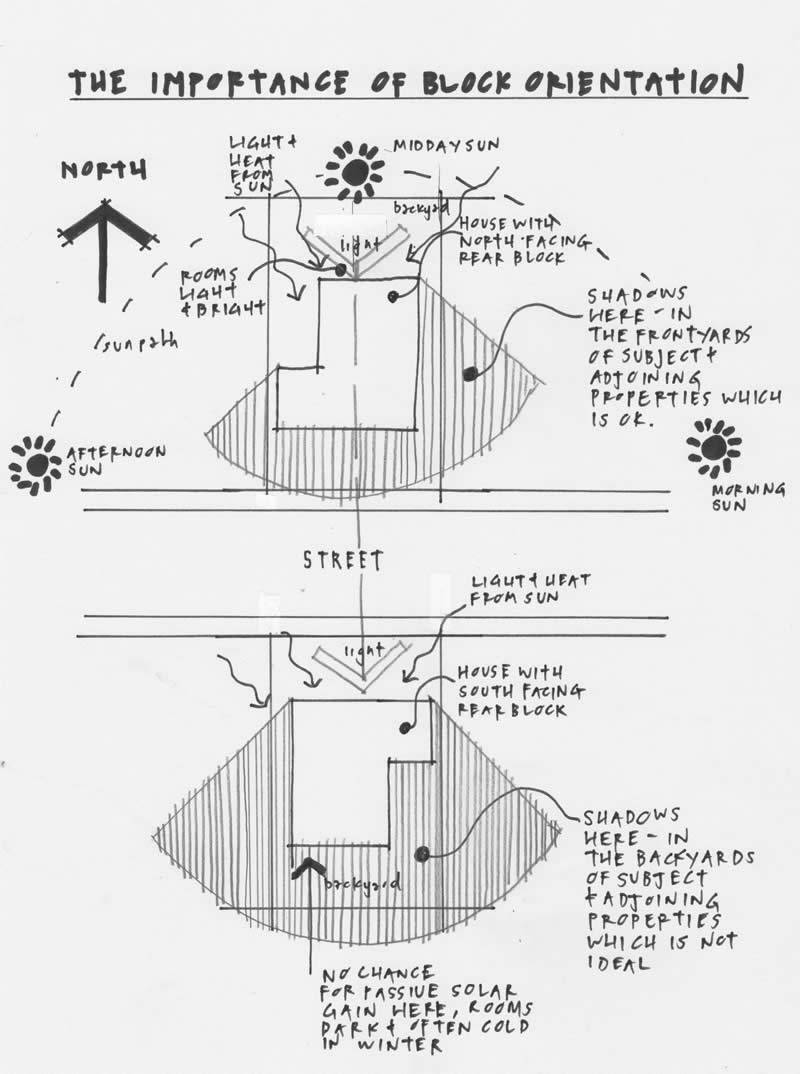 Car access and garaging is a really important consideration when buying a property. Irrespective of your reliance/needs for a car, as humans we are becoming increasingly reliant on a car to get around. If a property does not have the opportunity for off-street parking or a garage, it can definitely affect your capital growth potential. It is an element of what makes a property a good or bad one, as your buyer pool will be a greater one when it comes time to sell if you have an off-street option.

That said, in some parts of Melbourne (i.e. inner city areas such as Richmond and Albert Park), on-street car-parking is the norm rather than the exception. In these cases, important questions to ask are whether it is easy to park on the street out the front of the house (often it is) or whether the location is a ‘permit’ area.

Car access from laneways should be checked (often they are too narrow, bumpy or not safe, and history tells us people won’t use these on an ongoing basis as they are a nuisance or impractical). As a general rule, this situation is not practical or popular with buyers.

Garaging is becoming more of a higher property priority for the home-buyer. Most like/need the benefits of safety and security; a place where they can drive straight into from the street or a good-sized laneway and enter directly into the house. Shopping can be brought in easily, children taken care of and observed more closely, and, if it is raining, you do not get wet. In addition, the area can be great for storage.

When looking at the garage during an inspection, you should measure it yourself (don’t rely on agent measurements, as they can be misleading) and even ask the agent to ‘test it’ with your own car/cars if you can. A minimum size for a single garage is 3m x 6m and for a double garage 6m x 6m. I would look for bit wider than that – 4.5m for single car and 7m for a double to allow for easier opening of car doors. Tandem arrangements (i.e. where one car is parked in front of the other) are less ideal, as one car needs to be moved in order to get the other one out. Should we have a pool or not? Is it worth buying a home with a pool even if we don’t need one yet? These are some common questions and when looking at a property with a pool, there are some key things to look for.

Often buyers do not want a pool and will not look at properties that have them. These can be good opportunities for buyers, as you can easily remove and/or fill them in – at a cost of course. While this is not that simple, it is possible and certainly worth considering. The power of light

Natural light is critical: it really makes a house a home. As humans, we need light to survive, and in the day-to-day living within a house it can really affect your emotional state of mind. A ‘happy’ house is one that is often described as light and bright, and these often perform the best in terms of capital growth and resale.

In Melbourne, passive solar design is a very important consideration, given we live within a temperate climate. While things can get quite hot in summer, the winters can be cold and any opportunity to capture natural warmth into a home is well rewarded.

When we talk about orientations of property, ‘north facing’ is often brought up as a key plus to a property. By this, we are referring to the orientation of the rear, and this is often where the private living areas (internal and the external) are located and where the home is mainly lived in during daylight hours. In simple terms, having windows with a northern orientation means that the sunlight can enter directly, hence accentuating the sense of light and passive solar gain.

A well-designed home will try and take advantage of as much access to direct natural daylight as it can and that is often in the forefront of the minds of architects and good building designers.

When inspecting a home, one should always take a good amount of time observing light and natural warmth levels, particularly in the kitchen and informal living spaces. If artificial lights are needed during daylight hours (and often agents will have these turned on, to improve the house appearance), then there is a good chance that the spaces will be seriously challenged for natural light, and you will need to rely on turning on lights for most of the day. This can significantly raise energy costs but, perhaps more importantly, it can seriously impact on the light, warmth and feel of the space.

In life, first impressions really count, and this is particularly true when buying a home. More often than not, the house façade is the first photo that is displayed on the advertising of a house for sale, and, if it is not, then one probably thinks this property is not going to be too good. It is often the ‘public face’ of the family living within the home, and may be personalised as such. If buyers like the appeal of a home from the street, they will be drawn in to it. If they do not, they may not even visit or inspect the home, thus affecting saleability and capital growth.

For period home lovers, Victorian homes (those built 1880-1900) are perhaps the most popular, and the prettiest. Fortunately these were originally built in the time of ‘Marvellous Melbourne’ when there was no shortage of money and a great place for people to display their wealth, investing in ornate and intricate house details. Compare this to, say, homes built in post-war years (when money was tight and resources very limited) and the facades were very basic indeed – some may even use the word ‘boring’.

If you are looking to do a serious renovation to a home, the strength of the façade is critical and something you should really look at. Often buyers don’t, and that can be a cardinal sin. There is nothing wrong with renovating in a big way of course, but the façade needs to ‘look’ like a $3 million property from the street if you are buying it for $2 million and then thinking about spending $1 million in renovating it.

The entry to a home forms part of the street appeal. If the entry is within a prominent gable or underneath an ornate return veranda, this helps with the ‘welcoming’ appeal.
A well-kept garden can also add to the overall appeal, and it is best if this compliments the house style. For example, a native garden can look really good in front of a classic 1970s or 1980s home, but a little out of place in front of a Victorian cottage.

What to look for in a roof

I was told at university: ‘the steeper the roof pitch, the prettier the house’. A generalisation, yes, but not a bad point, when you think about it. In European and North American Alpine areas, you often see a steep pitch to the home, required mainly to deflect and redistribute snowfall.