It appears we are going to leave the first half of the 2015 property market as we entered it in January – low stock levels and a large number of buyers still wanting to buy.

Although holidays are on the minds of many agents, there are still plenty of ‘off-market’ properties transacting quietly.

Late July and August is looking OK in terms of auctions/new properties on the market, yet we don’t think the supply will be enough to satisfy the depth of buyers.

26 Wattle Valley Road, Canterbury (Dèsirèe Wakim / Hamish Tostevin) Passed in $3.6m, selling after well above this level. Corner blocks can sometimes be a tricky proposition for buyers, however, this was one that worked, offering a good feel inside and a classy renovation that has stood the test of time.

47 Erica Avenue, Glen Iris (Darren Krongold/Daniel Fisher, Gary Peer) sold for a very solid $3,650,000, having last sold only four years ago (2011) just under $2.4m.   The interest and home formula that we have seen selling strongly in Balwyn over the last few years is now starting to take off in Stonnington.

33 Mont Victor Road Kew (Helen Yan / Jonathon Huntsman, Hocking Stuart) sold over $2.8m on the weekend. Only 14 months ago, April 2014, it sold for $1.87m. Wow! That is strong in any language, and it really does demonstrate the ‘heat’ in the Kew market right now. One million dollars in just over a year! 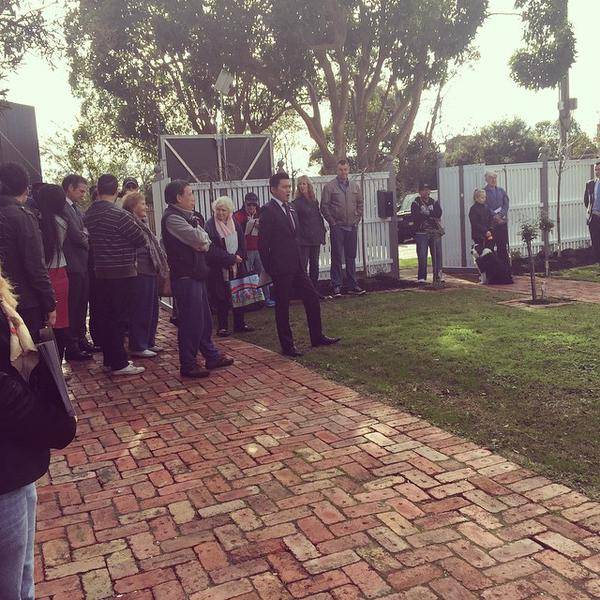 There were a couple of quiet land sales transacted in Martin Street, Brighton this week (Stefan Whiting, Buxton).

An unusual looking property this one, but it works for this part of inner Melbourne and with Rathdowne Village a short walk away, the offering is very appealing. Internally the home offered a lot of accommodation and was light and bright, yet tired in places. The big plus was the garage at the rear, which is very hard to find in this area. Auctioneer Tom Roberts (Nelson Alexander) gave a good preamble and dodges some passing traffic along the way, with listing agent James Keenan by his side. Opening with a vendor bid of $1.6m, the crowd of 30 or so looked at little disinterested and then a few minutes later a couple offered $1.62m and the property passed in to them. Sold after for $1,750,000, which was a good result for buyer and seller alike. 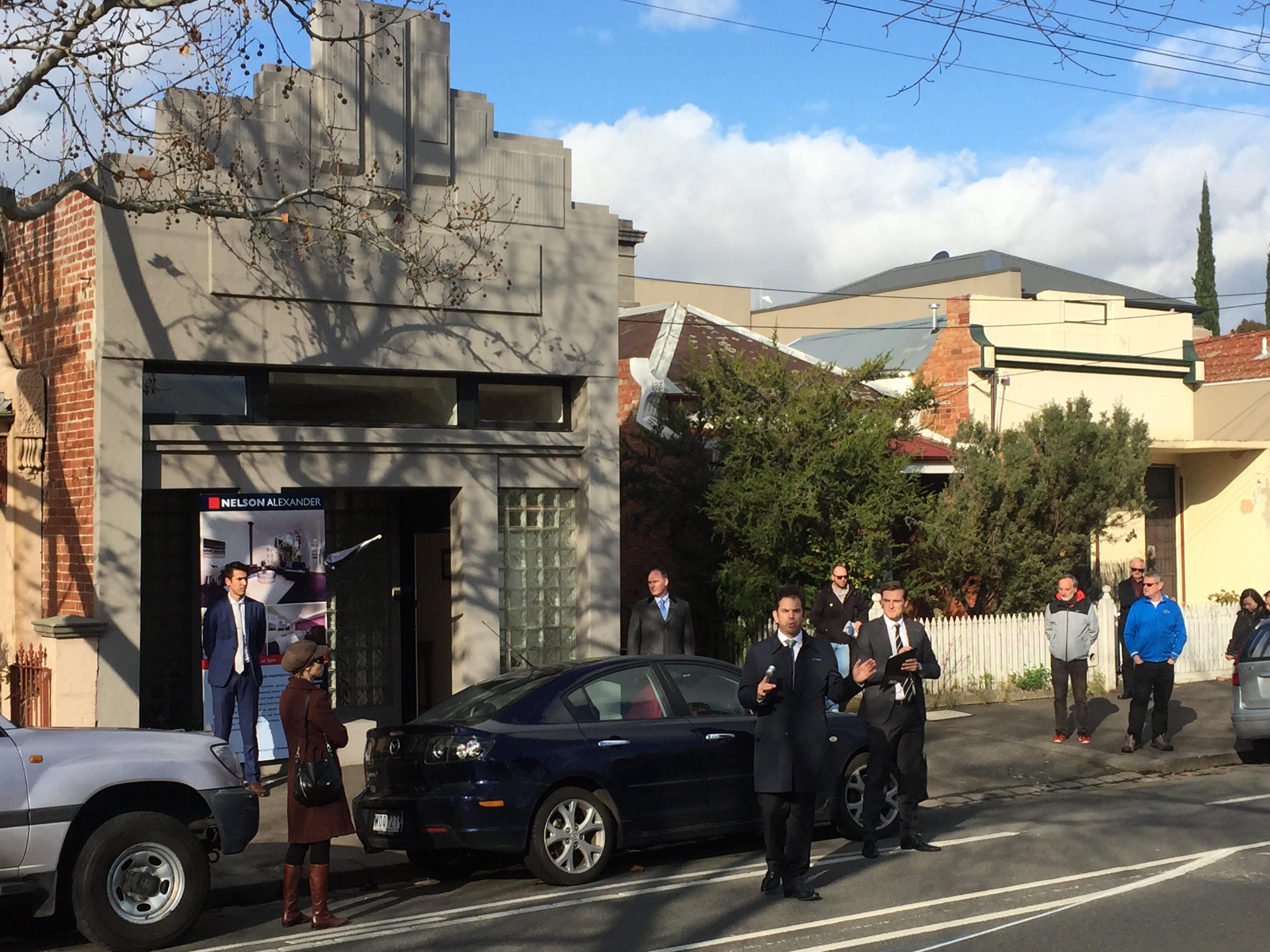 With dark clouds looming overhead and rain threatening the early morning auction, a small crowd gathered around auctioneer, David Lack. An opening bid of $1.4million started proceedings, and although the crowd was lacking in numbers, 4 bidders pushed past the reserve of $1.64m, where David announced that the property was selling. The hammer finally falling at $1.71m. 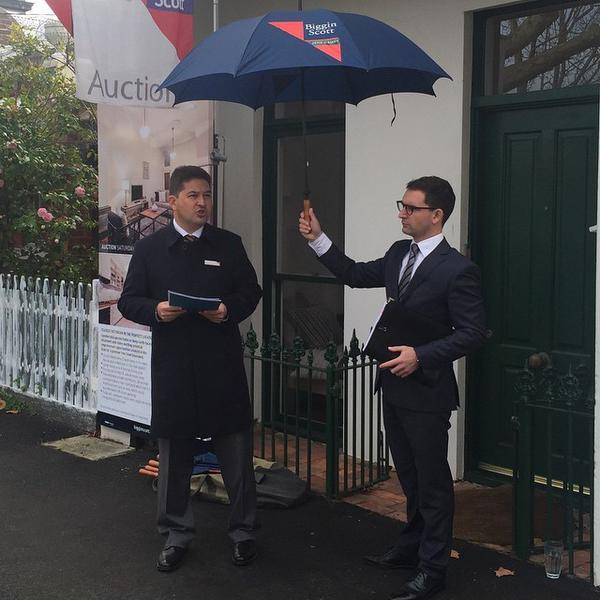 A large crowd gathered in the pretty front yard of this brick period home in the Gascoigne Estate, while children frolicked in the last remaining autumn leaves on the ground. John Bongiorno gave a thorough preamble and tabled a vendor bid of $4m straight out of the gate. Bidder 1 offered $4.12m and Bidder 2 came in shortly after. At $4.42m, Bidder 1 said he would bid again if the home was on the market. With that, Jack headed inside to speak with his vendor. Back outside, Jack announced the home was indeed on the market and Bidder 1 quipped “are you ready for that bid yet?” which brought some chuckles from the crowd.  A battle between the two bidders ensued before the home sold to Bidder 1 for $4.53m. 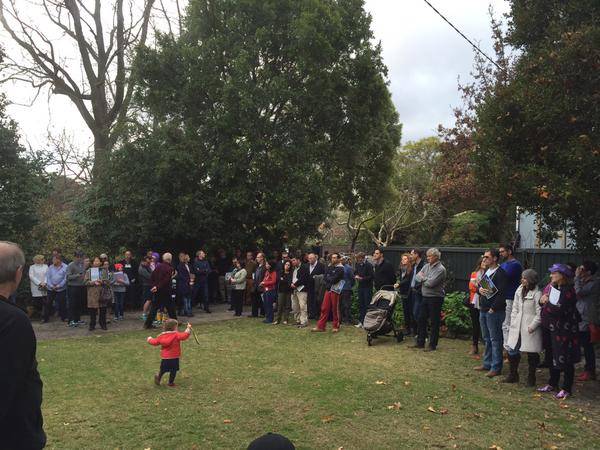 Agent Opinion: Are buyers paying a premium price for land purchases that come with approved plans? 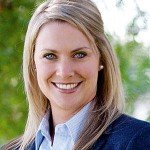 Kate Strickland (Marshall White): ‘Broadly purchasers will see plans in different levels of desirability based on their objective when buying the land. If there are plans for townhouses and they are wishing to build a family home then they are not going to add any value to the time, effort and dollars that have been outlayed to secure the plans and often permits. If the plans and permits are approved for what the prospective buyer is wanting to create, then they will definitely see the value and often push the price higher based on the ease and comfort of the process ahead. International buyers are falling into this category as they are wishing to begin demolition and build immediately at settlement.’