Good results – although still on low numbers!  Many of the better homes that were auctioned on the weekend had the luxury of selling in isolation (i.e. no similar homes competing against them), allowing buyers to focus all their attention on the one property.

The next two weekends will still see lower numbers across the board, with the 20th looking like the first weekend that there will be greater choice for buyers.

The single storey down-sizer market is continuing to strengthen: Scott McElroy was auctioneer at the auction of this pretty, updated Californian bungalow in a quiet Hampton street. The crowd huddled around as Scott gave a thorough spiel and called for an opening bid. Bidder 1 chipped in straight away, with an offer of $1.7m. Bidder 2 came in shortly after and a two-way battle ensued before the home was announced on the market at around the $2.09m mark. Bidding continued in$5k increments until the hammer came down at $2.31m to a round of applause from the 60 or so people that had gathered. A brisk morning start didn’t slow Peter Kennett down – he was as entertaining as ever as he introduced the property for auction. After a thorough preamble, and a lot of laughs from the crowd of around 40 people, Peter called for an opening bid. Unable to secure one, he tabled a vendor bid of $1.75m but when all remained quiet, he ducked inside to refer to his vendor. A second vendor bid of $1.8m was put forward but with no genuine bids on the day, the property was passed in. It sold a short time after for $1.888m.

Agent Opinion:“Have you seen any changes to the market pre and post school/winter holidays? Do you expect the new FIRB and vendor sales over $2m tax rules to have any impact?” 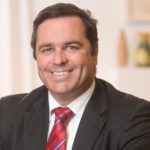 Andrew James (Hocking Stuart): “Post school holidays, we are seeing some big crowds at auctions. With the Federal Election over, school holidays ceasing and Spring just around the corner, buyers are feeling more confident. Plus, bidding interest is being boosted by a lack of quality housing stock. Hocking Stuart’s clearance rate has been above 75 percent for the last two weeks, signposting strong buyer interest. With that said, open for inspection attendance hasn’t been as strong as auction turn outs have, however quality properties in sought after locations continue to attract interest. Foreign buyers in the mid-market have been more subdued as a result of new taxes and regulations, but international buyers looking in the top end of town remain largely undeterred.  All of these factors are pointing to a solid Spring market, with a boost in volume and clearance rates.”